Exactly one year passed since we released pretix 1.0! In the meantime, we released lots and lots of features at the beginning of each month. We'll continue this way and therefore are proud to announce version 1.12 today! Big thanks go out to Aiman Parvaiz, Felix Rindt, Mohit Jindal, Ture Gjørup, and Tobias Kunze, who contributed to this release. ❤️

pretix 1.12.0 is now available for installation via pip. The new docker images will appear on Docker Hub over the next few hours. All customers of pretix Hosted are already using the new version and do not need to take any action.

pretix allows you to define any number of questions that you want to ask your participants when they buy their tickets. This can be very useful -- but also troublesome when you need to ask details that many participants probably do not yet know for sure when they sign up for your event.

With pretix 1.12, you can configure questions to be asked not online, but instead at the time of check-in. When the ticket is first scanned with one of our apps, the person operating the app will be prompted to enter answers to the questions you defined beforehand. If the questions are non-optional, scanning the ticket will not be possible before entering the appropriate answers. 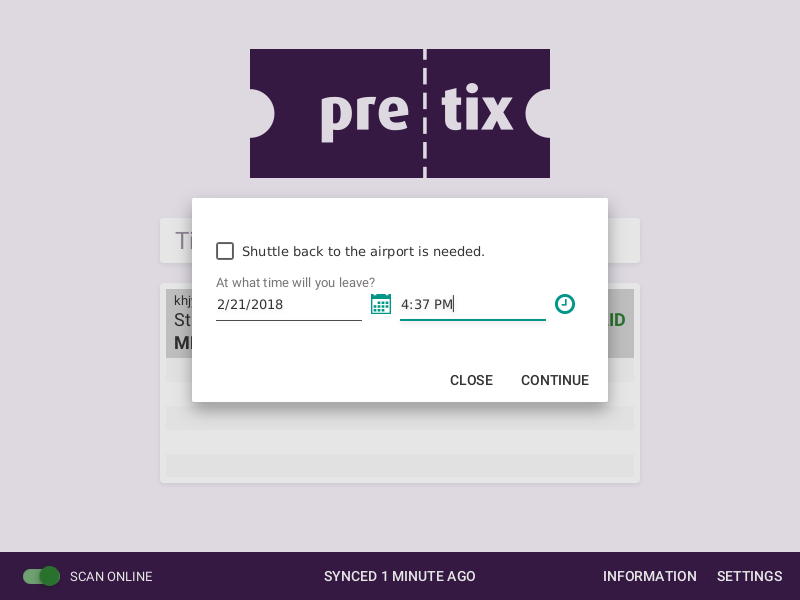 This feature is supported by both our desktop and Android apps. In order to use it, you will need the latest versions of these, namely pretixdesk 0.2.0 or pretixdroid 1.8 or newer. All types of questions (except file uploads) are supported.

As you might have already guessed from the screenshot above, new types of questions have been added in this release. In addition to numbers, texts, yes/no values, selections, and files, you can now also request your users to fill in questions that can be answered with a date, a time of day or a combination of date and time. This makes it easier to collect information of these types independently of the date formats of different languages etc.

Previously, modifying invoice addresses, attendee names, and question answers was only possible from the customers view -- and turned impossible once the "last date of modifications" was reached. With pretix 1.12, you can change this information directly from the order detail view in the organizer backend -- whenever you want.

System administrators can now create and modify user accounts via the web interface. For the first time, this creates an official way to create multiple system administrators, as well as resetting passwords and creating users (without inviting them to a team) if the respective self-service options are turned off in the pretix.cfg configuration file.

Some of the improvements in this release have been possible as a result of the support received by the BMBF via the PrototypeFund as well as thanks to our friends at ERNW Insight.

Raphael is the founder and main developer of pretix. He is passionate about user-friendly, elegant software, and when he's not busy building software for conference organizers, he enjoys to co-organize a con­ference himself.