Today, we are releasing the next monthly release of pretix. pretix 2.3 includes a new navigation pattern for the backend, as well as new options for sales channels and our widget. Big thanks go out to Alexander Schwartz, Alvaro Enrique Ruano, arabestia, Felix Rindt, Maarten van den Berg, Martin Gross, Matheus Nunes, Mikkel Ricky, Tobias Kunze, and oocf who contributed to this release. ❤️

pretix 2.3.0 is now available for installation via pip. The new docker images will appear on Docker Hub over the next few hours. All customers of pretix Hosted are already using the new version and do not need to take any action. 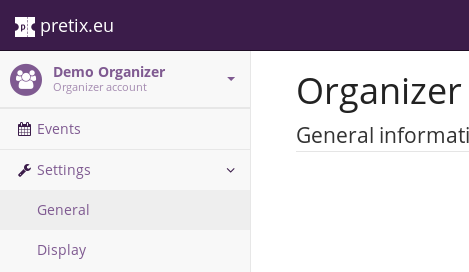 We've changed the structure behind our main navigation on the left side of the backend. Previously, the navigation showed either menu items on a global level or specific to an event. For new users, it was hard to understand the difference at times and it took a long time to navigate to some places like organizer-level settings.

We're now making this more explicit and easier to switch. At any time, the navigation is now in one of three modes: Either it shows global menu items concerning pretix in general, or it shows menu items for a specific organizer, or for a specific event. The first row will always show the current context of the navigation and by clicking it, you can very quickly switch to another context.

At the same time, we're allowing plugins to add their menu links as a sub-item of other navigation links, so the list gets shorter in total and easier to find your way around.

For quite a while, pretix has supported selling tickets over very different sales channels. Next to the web shop, we support selling tickets via local resellers, as well as our new pretixPOS box office application. So far, we only supported selling the same set of products at all of them, but sometimes, you might want to restrict this or apply different pricing for one of the channels.

With pretix 2.3, you can now restrict products to only one or more of these sales channels. Additionally, you can also specify different ticket layouts, depending on the sales channel in use. This is especially useful if you need special paper sizes for tickets sold through resellers or pretixPOS:

Passing data to the widget

For a long time, our pretix Widget has provided a great way to embed the ticket shop right into your web page. We now extended the widget with a small client-side API that allows you to pass data through to the ticket shop. For example, if a user is already logged in on your website, you might pass their name and email address through to the widget so they don't have to enter it twice:

However, the same feature also allows improving your web analytics, as you can pass a campaign ID, or even use this to implement cross-domain Google Analytics tracking with our tracking module.

Our pretix-tracking module now allows you to specify a LinkedIn partner ID which will then include a LinkedIn tracking snippet in the ticket shop. If you run advertisement campaigns for your event on LinkedIn, this will make it easier for you to take them to a new level.