Following our monthly release schedule, we today release the next stable version of pretix. Big thanks go out to Dominik Weitz, Felix, Jakob Schnell, Jarkor, Tobias Kunze, and xeen, who contributed to this release. ❤️

With this release, we introduce our new check-in app for desktop computers along with a bunch of smaller improvements.

pretix 1.11.0 is now available for installation via pip. The new docker images will appear on Docker Hub over the next few hours. All customers of pretix Hosted are already using the new version and do not need to take any action.

The largest change in pretix itself is the new possibility to get notified whenever something happens in your event. If you have an event that only sells a few tickets per week or month, it is cumbersome to have to open pretix regularly just to have the lastest numers or to react to ticket orders.

Therefore, you can now configure in detail if and when we should notify you of anything that happens, globally or on a per-event basis. You can access these settings by clicking on your name in the top-right corner and then the link to the notification settings. 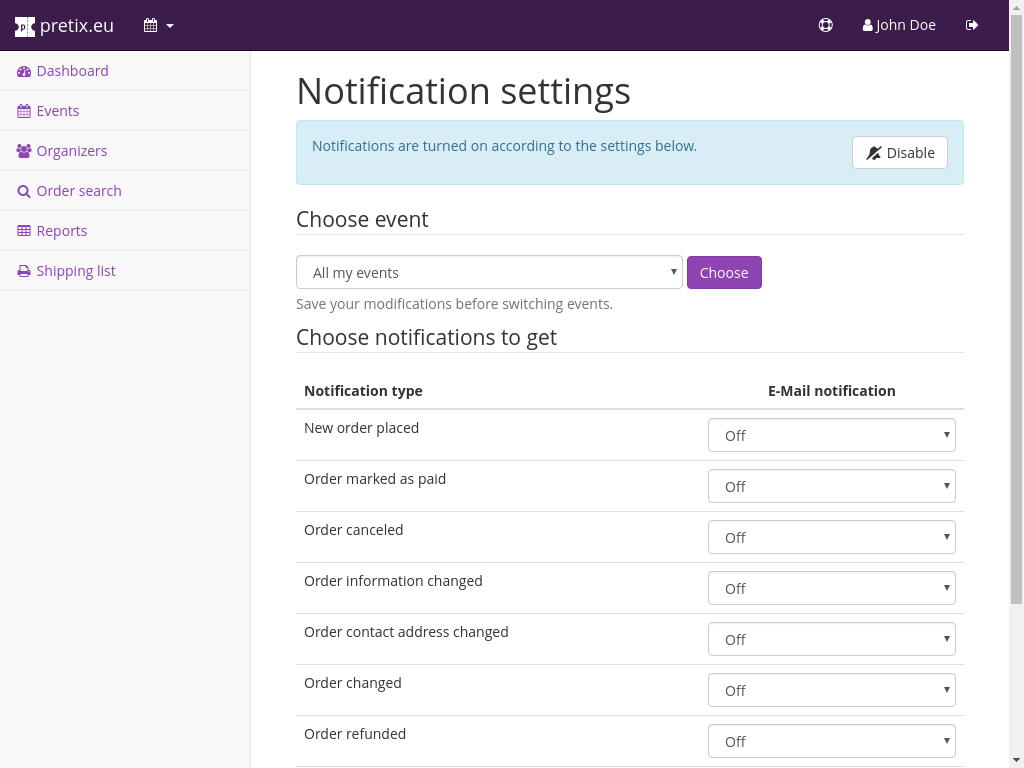 For more than a year, pretix has been shipping with the pretixdroid Android app that can be used to scan tickets at your event entrance.

Today, we present a new member of the family: pretixdesk brings the same functionality to your desktop or laptop computer. This might be useful if you are looking for a more statically installed solution than an Android device or working with a high-quality USB barcode scanner.

For now, pretixdesk provides exactly the same features as pretix, including attendee search, asynchronous mode and statistical information. In the future, we have plans to extend pretixdesk further to allow for features like box office sales etc.

These future plans are also why we decided to go for a traditional downloadable application instead of an offline-capable website. Only with a local application on your computer we'll be able to get the required possibility to save data to a reliable data storage on your device later if we e.g. process payment data directly through pretixdesk.

pretixdesk is available as an installation package for Windows, Debian/Ubuntu, and Arch Linux, but can also be installed on any other device that runs version 9 of the Oracle JVM.

Some of the improvements in this release have been possible as a result of the support received by the BMBF via the PrototypeFund as well as thanks to our friends at ERNW Insight.