Today, we are releasing the next monthly release of pretix. pretix 1.16 is one of the releases where we don't put out many large features, put polish lots of corners everywhere and are busy preparing some larger news in the background. There's still more than enough reason to upgrade! Big thanks go out to etiontdn, Felix Rindt, Jakob Schnell, Jochem van Kessel, Lorenzo Peña, luto, Maarten van den Berg, Maarten Visscher, Mason Mohkami, Mikkel Ricky, Pernille Thorsen, Pieter Roziers, robbi5, Sebastian Wallroth, and Wallaber Pinheiro, who contributed to this release. ❤️

pretix 1.16.0 is now available for installation via pip. The new docker images will appear on Docker Hub over the next few hours. All customers of pretix Hosted are already using the new version and do not need to take any action.

Starting with this version, you can not only have one single design for all your tickets, but you can create multiple layouts and then assign the layouts to your various products. This will come in useful if you have a range of widely varying products that should have visibly distinct ticket layouts. 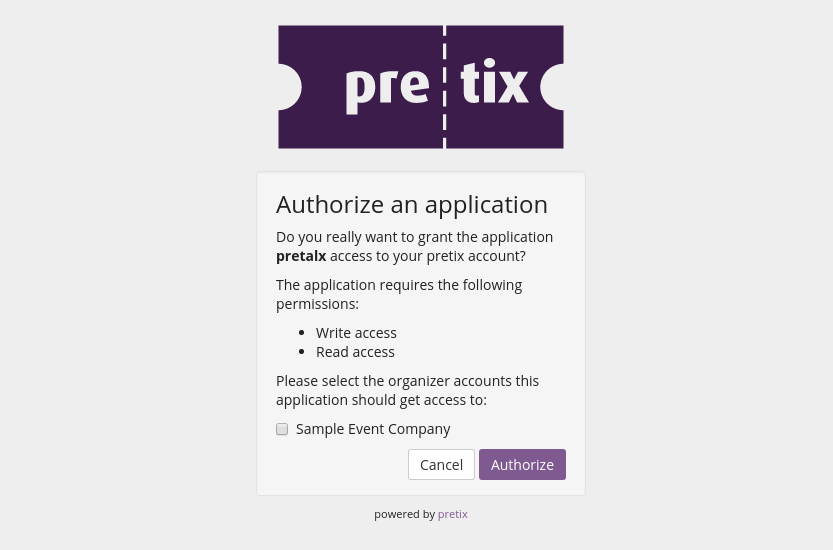 We've got great news for everyone who wants to integrate their web service with our pretix API: You can now request access to an user's pretix account using OAuth2, removing any need to manually copy and paste API keys around. We're looking forward to the great applications you will build with and around pretix!

Our REST API has also been improved in other places (see below), but we've now added the one thing you've always asked for: It is now finally possible to create orders through the API, at least for the most common purposes.